Celebrating two decades of their world-famous winter tour, Trans-Siberian Orchestra bring the thrilling story and majestic production of "The Ghosts of Christmas Eve" to Frank Erwin Center on Thursday 20th December 2018! A rhapsodic experience, the "Ghosts of Christmas Eve" Tour, based on their 1999 TV movie of the same name, "tells the story of a runaway girl who seeks shelter in a mysterious abandoned theater on Christmas Eve"! Featuring incredible lighting, set design and pyrotechnic skill, as well as phenomenal musicianship, this is an experience you'll never forget!

"TSO is excited to celebrate 20 years on the road this winter with an all-new production of ‘The Ghosts of Christmas Eve’ featuring the Best of TSO and more!!" – Trans-siberian.com 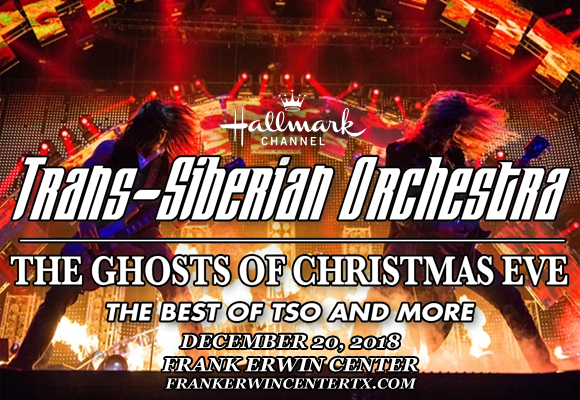 In 1993, Paul O'Neill, manager and producer of several rock bands (including Aerosmith, Humble Pie, AC/DC, Joan Jett, and Scorpions), began working with Jon Oliva, found, keyboard player and vocalist of progressive metal band Savatage, as well as Al Pitrelli and Robert Kinkel who also worked with Savatage. Three years later, Atlantic Records offered O'Neill the opportunity to form his own band on the label, and with the help of Oliva, Kinkel, and Pitrelli he began the project, which aimed to bridge the worlds of classical and rock music. According to O'Neill, "My original concept was six rock operas, a trilogy about Christmas and maybe one or two regular albums." The group's debut album, a Christmas-themed tock opera concept album called Christmas Eve and Other Stories, was released in 1996. To date, the group has released nine studio albums, including five Christmas albums and one Christmas compilation album. They have sold over 10 million albums throughout their career, and over ten million concert tickets. Trans-Siberian Orchestra is known for its grandiose stage shows, which involve extensive use of pyrotechnics, lasers, and lights, which synchronize with the performance of the band and their many touring musicians. In 2009, Trans-Siberian Orchestra was ranked by Billboard as one of the Top 25 Touring Artists of the past decade.