EVENT POSTPONED (date TBA). Hold on to your tickets! They will be valid for the new date once announced.

Nevada rock giants The Killers are heading to Frank Erwin Center on Saturday 12th September 2020 as part of their Imploading the Mirage Tour, named after their highly anticipated upcoming sixth studio album! The album is the follow-up to 2017's Wonderful, Wonderful, and no doubt the group will be playing a feast of previous hits for fans as well as their exciting new material! The quartet will be joined in support by legendary former-Smiths guitarist Johnny Marr!

“We’ve been putting this tour together for a long time and we are extremely excited to finally share it with you,” the statement read. “We look forward to a great summer of shows.” 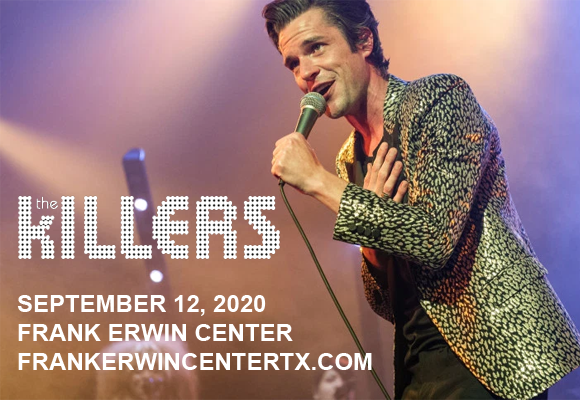 One of the biggest rock bands of the 21st century, The Killers have sold more than 28 million albums worldwide throughout their career. Formed in Las Vegas, Nevada in 2001 by Brandon Flowers (lead vocals, keyboards, bass) and Dave Keuning (lead guitar, backing vocals), the group's line-up has consisted of Flowers, Keuning, Mark Stoermer (bass, rhythm guitar, backing vocals) and Ronnie Vannucci Jr. (drums, percussion) since 2002. The Killers made their debut in 2004 with the chart-topping album Hot Fuss, which launched four hit singles – "Mr. Brightside", "Somebody Told Me", "All These Things That I've Done" and "Smile Like You Mean It" – and was certified multi-platinum in the US, UK, Australia, Canada, Ireland, and New Zealand, as well as earning the band five Grammy Award nominations. Hot Fuss was the first of five consecutive number-one albums in the US for the band. Over the years, the band has also released a B-sides and rarities compilation, Sawdust (2007); a live album, Live from the Royal Albert Hall (2009); a greatest-hits album, Direct Hits (2013); and a Christmas compilation, Don't Waste Your Wishes (2016). A sixth studio album, Imploding the Mirage, is slated for a 2020 release.