It’s a sad but exciting time for all – the legendary Paul Simon has announced his last EVER tour. The “Homeward Bound” tour will arrive at the Frank Erwin Center on Monday 4th June 2018! Tickets for this iconic show will disappear fast so don’t delay – get yours now while you have the chance and get ready to be part of a tour that will go down in history!! 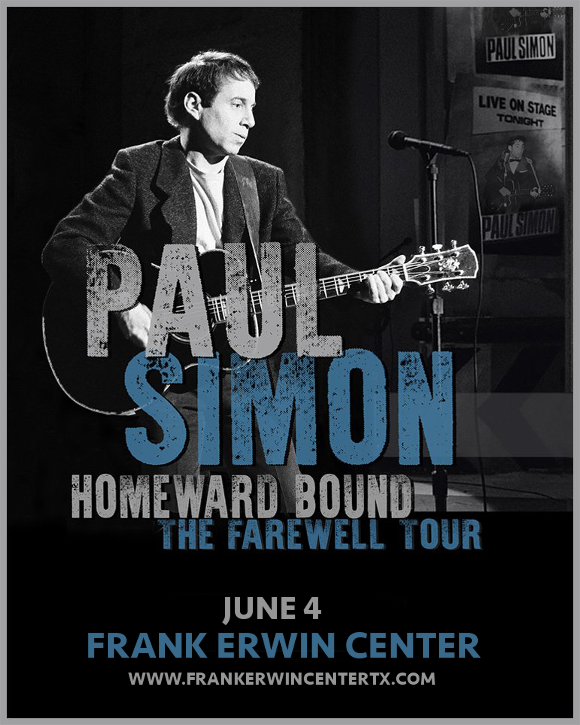 First achieving massive worldwide fame with Art Garfunkel as Simon and Garfunkel, with three number one singles on the U.S charts; "Mrs. Robinson", "The Sound of Silence", and "Bridge over Troubled Water". Paul Simon continued as a solo artist when the duo split up in 1970. His most successful album, “Graceland,” sold 14 million copies across the world and is widely considered to be one of the most influential albums ever made.

“I’ve often wondered what it would feel like to reach the point where I’d consider bringing my performing career to a natural end,” the 16-time Grammy award winner mused, when asked about his final tour. “Now I know: it feels a little unsettling, a touch exhilarating and something of a relief. I love making music, my voice is still strong, and my band is a tight, extraordinary group of gifted musicians. I think about music constantly.”

It’s a bittersweet goodbye from the singer to his fans – and no fan can afford to miss it! Get your space NOW for what promises to be one of the most in-demand shows of the year!!