Beloved crooner Michael Buble brings his silken voice to Frank Erwin Center on Monday 20th September 2021 (Rescheduled from Tuesday 16th February 2021) for An Evening of Michael Buble! The multi-platinum-selling four-time Grammy award winner returns to the stage for this very special tour that marries traditional pop standard with songs from his glittering repertoire of hits, for a night that has a little something for everyone! With a classic sound that is perfectly matched by his captivating charisma, Buble is the consummate showman who truly puts his all into every show! The perfect evening's entertainment for you and your loved ones! 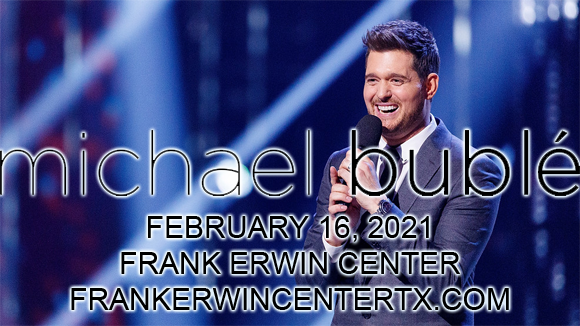 Canadian singer, songwriter and record producer Michael Bublé is known as a modern-day crooner whose traditional pop love songs have garnered him a huge fan base over the years. He first found fame in 2003 with his eponymous debut album, which reached the top 10 on both the Canadian and UK charts. His follow-up albums, 2003's It's Time and 2005's Call Me Irresponsible, both hit number one on the Canadian Albums Chart, the UK Albums Chart, the US Billboard 200, the Australian ARIA Albums Chart and several European charts. In 2009, Bublé released Crazy Love – his fourth number one on the Billboard's Top Jazz Albums Chart and second on the Billboard 200, where it stayed in the top spot for two weeks. Christmas, his 2011 holiday album, also reached number one on the Billboard 200 and stayed there for five consecutive weeks. Throughout his career, Bublé has sold over 40 million records worldwide, and won numerous awards, including four Grammy Awards and multiple Juno Awards. Love (written as the heart emoji), his tenth and most recent studio album, was released in 2018 and hit number one in the UK and Canada, and number two on the Billboard 200.