Despite being a man of smaller stature, Kevin Hart is definitely one of the world's biggest comedians right now! There seems to be no stopping the author, athlete, mogul, actor and comic whose previous tour broke records and sold over $100 million! Now, Hart comes to Frank Erwin Center on Friday 2nd November 2018 on his Irresponsible Tour – another hilarious stand-up show that this time pokes fun of his recent (and very public) misdemeanors in Hart's trademark self-deprecating and irreverent way! Tickets available now for what is bound to be a sell-out tour – don't delay! 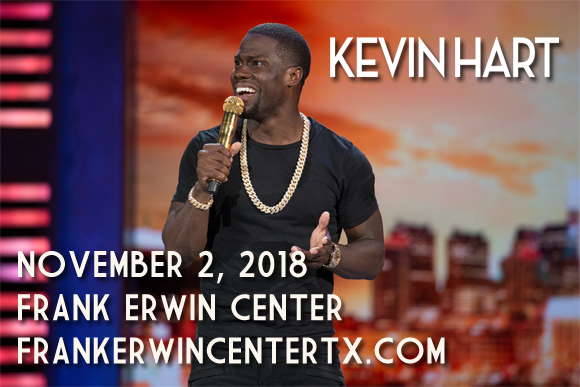 Actor and comedian Kevin Hart began his career in the comedy clubs of New England, winning several amateur comedy competitions over the years, having first taken to the stage at The Laff House in Philadelphia under the name Lil Kev. Hart first became a household name in 2001 when he starred in Judd Apatow's Fox series Undeclared, and he continued his on-screen career in the films Paper Soldiers (2002), Scary Movie 3 (2003), Soul Plane (2004), In the Mix(2005), and Little Fockers (2010), and more recently 2015's Get Hard and 2017's Jumanji: Welcome to the Jungle. His first stand-up album, I'm a Grown Little Man, was released in 2008 and was followed in 2009 by his first stand-up tour of the same name. Hart's 2015/2016 What Now? stand-up tour cemented his reputation as one of the world's most popular and highest-grossing comedians, grossing over $100 million worldwide. Hart also released a soundtrack album for the tour, the Grammy Award-nominated Kevin Hart: What Now? (The Mixtape Presents Chocolate Droppa), as well as an accompanying film. In 2017, Hart also released a memoir – the #1 New York Times Bestseller, I Can’t Make This Up: Life Lessons, which debuted in the top spot and stayed there for ten consecutive weeks. Hart is now touring "Irresponsible", which is his sixth stand-up tour.