Get ready for one of the biggest shows of the decade – that’s right, it’s Janet Jackson on her long-awaited “Unbreakable” tour!! She’ll be coming to the Frank Erwin Center on Sunday 10th September 2017 for a night of smash hits and incredible choreography that you’ll never forget! Get your tickets NOW as they’ll sell out fast – hit the “Buy Tickets,” button above!! 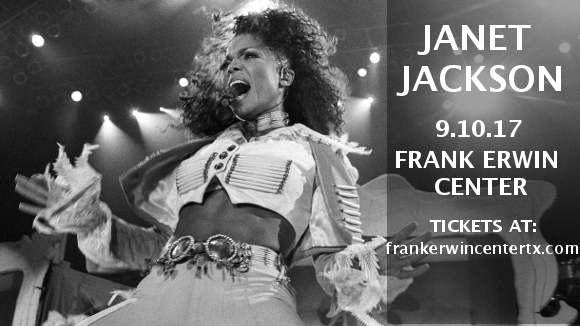 The last born of the 9 Jackson siblings, by the time Janet Jackson was born, in 1966, the Jackson 5 had already begun performing together. At the age of seven, Janet made her first appearance with the band. She went on to appear on several TV shows before releasing her first, self-titled album in 1982, but it wasn’t till her third album, working with new manager John McCain, and working with Jimmy Jam and Terry Lewis in studio, that she received substantial media attention – and a lot of it!! “Control,” portraying Janet Jackson as a powerful, confident and independent young woman, was a global sensation. It shot straight to number 1 on the charts, saw 5 of its singles in the top 5, and sold 14 million copies across the world!

From then on, Janet Jackson’s career went from one high to another, including a collaboration with brother Michael Jackson on the single “Scream,” the groundbreaking video for which would become the most expensive music video ever made. Her latest album has been named by many publications as one of the best releases of 2015 – don’t miss your chance to hear it live!!