Having made huge waves in hip hop with the release of his first three mixtapes, Chicago emcee Chance The Rapper has finally released his eagerly anticipated debut album! Bringing The Big Day Tour to Frank Erwin Center on Thursday 24th October 2019, he'll be performing tracks from the LP, which features guest appearances from Smino, Nicki Minaj, Megan Thee Stallion, Gucci Mane, Lil Durk, MadeinTYO, DaBaby, and John Legend! Who knows who he'll be bringing on stage with him, but it's bound to be one hell of a show! 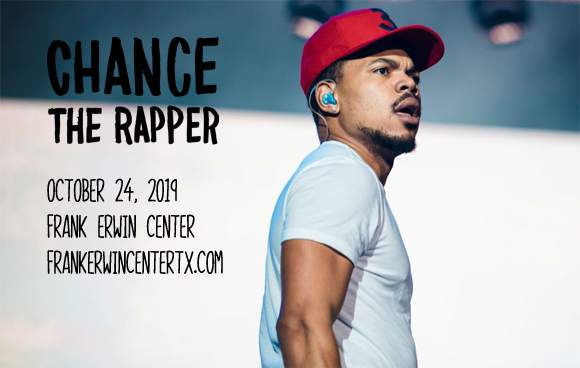 Chicago-based hip hop artist Chance the Rapper first came onto the scene in 2012 with his debut mixtape 10 Day. The American rapper, singer, songwriter, actor and activist found mainstream popularity with his critically acclaimed second mixtape Acid Rap, and his third mixtape, Coloring Book, earned him three Grammy Awards, including the award for Best Rap Album. Coloring Book peaked at number 8 on the Billboard 200 and was streamed over 57.3 million times in its first week of release, becoming the first streaming-only album to ever receive and win a Grammy nomination. The Big Day, his debut studio album, was released on July 26, 2019. In addition to being a solo artist, Chance the Rapper is also a member of the Chicago collective SaveMoney, and he is the vocalist for the band the Social Experiment.