There's a whole heap of excitement brewing at Frank Erwin Center, as preparations take place for Arcade Fire on their incredible Infinite Content tour, hitting the Frank Erwin center on Wednesday 27th September 2017! Their brand new album, “Everything Now,” will have just been released, meaning the tour will be chock full of brand new material!! Don't delay – get your tickets now while they last!!! Click the Buy Tickets button to get yours today. 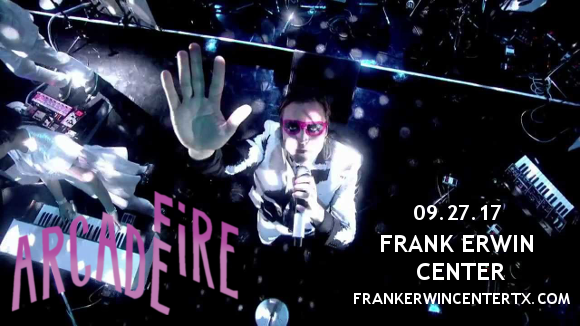 Arcade Fire’s follow-up album to 2013’s stunning “Reflektor,” has been hotly anticipated for months, with the band cryptically teasing with snippets the whole way along – from a Twitter account pretending to be a Russian spambot leaking updates, to the recent release from a new, official Twitter account tweeting anagrams of the band’s live setlist. It’s no wonder fans are so excited – since their very first album, “Funeral,” in 2004, Arcade Fire have kept up a consistent standard of quality hat few other bands can match.

Described as "celebratory, emotionally rich and life-affirming” by Stylus, “Funeral,” is regarded as a modern classic. The band’s second album, “Neon Bible,” won them a Juno Award and Meteor Music award, whilst their third, “The Suburbs,” won the band a Grammy!! n 2013, the band went on to score the soundtrack for the major motion picture “Her,” and in the same year released their fourth album, “Reflektor,” which was listed by Pitchfork in their list of The 100 Best Albums of the Decade So Far.

With a track record like this, we can’t wait to see what’s coming next – can you???